In 1983, an advert appeared in the First Citadel Compendium ('An Irregular Journal') for a forthcoming game from Games Workshop, called 'Rogue Trader'.

Written by Rick Priestly, the text on the advert promised:

Find out with Rogue Trader - adventure, mayhem and destruction on a cosmic scale. 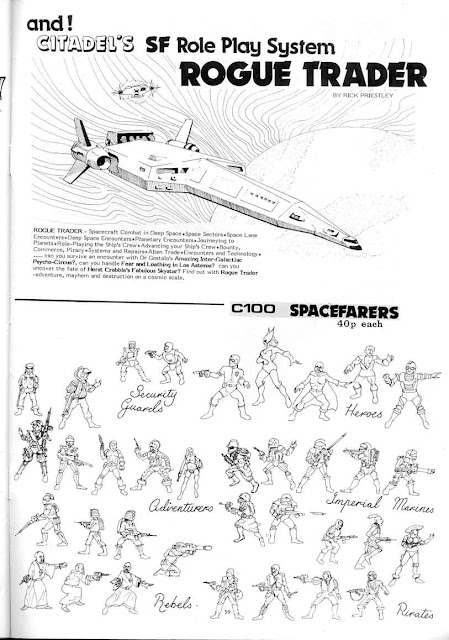 The first advert for Rogue Trader!
Following this advert, the trail would go cold on Rogue Trader for nearly 4 years.
Games Workshop would follow this with the subsequent releases of 1st and 2nd edition Warhammer Fantasy Battle, which, as the title suggests, concentrated on what they felt was the more popular Fantasy genre for massed battles.
The writer, Rick Priestly, had been working on licensed games for Games Workshop such as the Judge Dredd Roleplaying Game, when he returned to the idea of Rogue Trader.
Work on Warhammer 40,000; Rogue Trader (referred to as RT throughout this article) began in earnest alongside the 3rd edition of Warhammer Fantasy Battle (WFB), with which it shares many similarities in style and rules (more on this later).
The public got the first, proper view at what RT would be in White Dwarf 93 (September 1987). 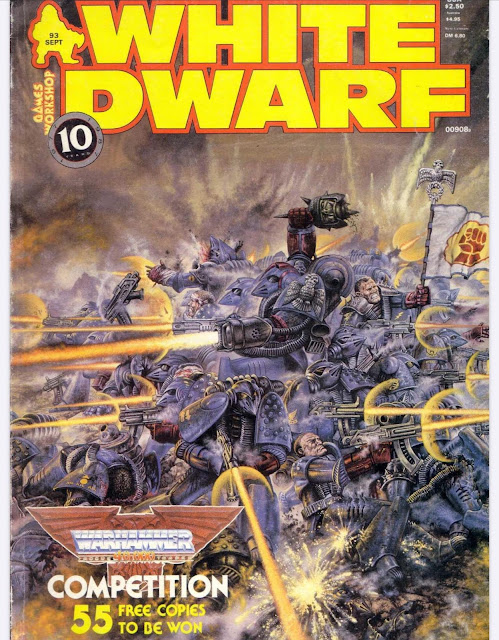 A four page, full colour insert set the premise and setting of what RT was, starting with the now famous introductory text that has graced the beginning of every 40k rule book since: 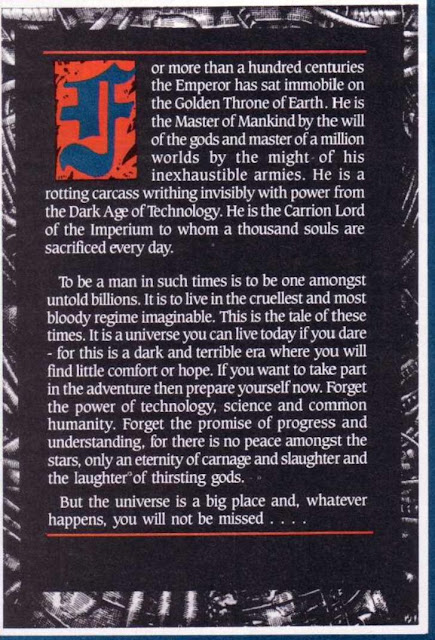 This single paragraph, for me,  created the entire game's setting; it was a world of horror, of hopelessness and a constant state of warfare.
In 1987, we were still in the grips of the Cold War, Gorbachev was yet to come to power and the world was constantly on the precipice of Nuclear War.  Margaret Thatcher's Conservative Government was 8 years into its rule, the recession years of the early 80's still loomed large, with the fallout of the Coal Miner's Strike being felt by those in the East Midlands (where the writers lived).
Talking to the blog, Tales From The Maelstrom, Rick recalled how he was influenced by the themes of 2000ad, Larry Niven, Harry Harrison and others, to come up with a form of open-play skirmish game with a role-playing element, moderated by a Games Master.  This, combined with the politics of the time made for a dark satirical universe, the likes of which hadn't really been seen in the war-games community before.
The artwork in the preview supports this - mostly black and white drawings, it evokes a strange, gothic style, dark, cable filled rooms, with shadowy figures with skull faces hunched over arcane machinery. One piece shows an emaciated man at the heart of a machine, plugged into what looks like a arterial tubes, unable to support his own weight, yet powering the machine... the piece is titled 'The Emperor' and is our first view of him: 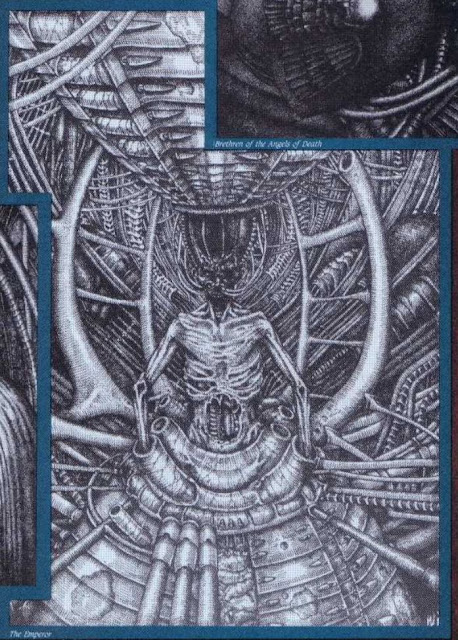 To me, as a 13 year old, obsessed with books on Durher and Bosch, this artwork immediately attracted me to the setting. Combined with the colour artwork, which had, to me, more than nod to 2000ad (with which I'd realise was down to the fact that the artists such as Carl Critchlow worked on both titles) which showed gritty Space Marines at rest in what looked like a bar and hunting a villain, I was sold. 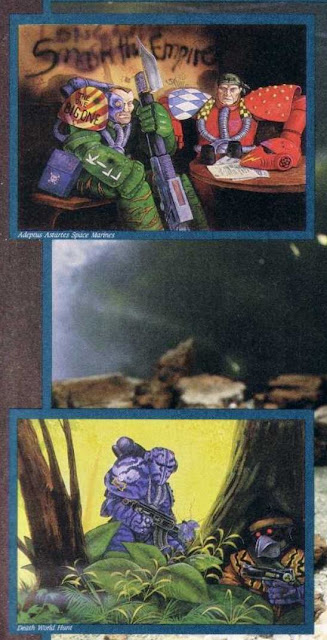 'Smash The Empire'!
This juxtaposition of the arcane with the irreverent is for me, the heart of what 40k was, and still is - the phrase 'Grim Dark' had yet to be taken seriously, this was the age of the anti-authority, punk ethos in the game (as can be seen through the depiction of the Space Marines sat in a bar with almost- Vietnam style scrawling on their armour), offsetting the sheer horror of constant war and the cheapness of life.
The preview ended with adverts for the first two boxed sets of miniatures for RT: Imperial Space Marines, and Space Orks.
The Imperial Space Marine box (referred to by it's stock code, RTB01) was Games Workshop's first box of multipart, plastic miniatures (they'd produced plastic miniatures previously under the 'psychostyrene' brand for Fighting Fantasy amongst others previously, but these were monopose miniatures). Imperial Space Marines Boxed Set Advert
With enough parts to make three complete ten man squads, this box was a MUST HAVE for those who wanted to play as Space Marines (which were already available as metal miniatures at this point prior to the rulebook coming out).  The early releases of this box were in green styrene, which, with later releases, changed to a beige styrene.
The second box set, RTB02, Space Ork Raiders, contained 17 metal miniatures (lead at this point) - nicely sculpted and full of character, as with the Space Marine box, these Orks would set the tone for the faction for the next 30 years. 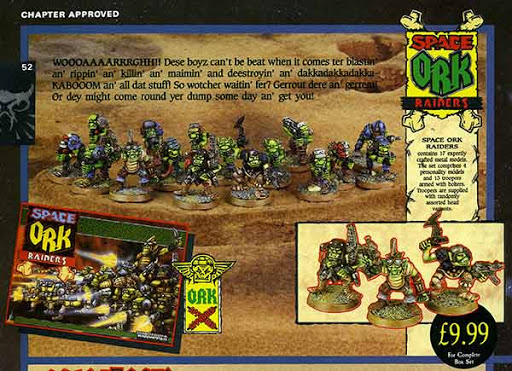 So that's the preview. In the next article, I'll be going through first impressions of the RT rulebook!
I'd love to know your first experiences of RT - where you there at the start? What did you think? Let me know by leaving a comment!

In 1983, an advert appeared in the First Citadel Compendium ('An Irregular Journal') for a forthcoming game from Games Workshop, c...